Short CV: Ponnurangam Kumaraguru ("PK") is a Professor of Computer Science and Dean of Students Affairs at IIIT-Delhi. He is an Adjunct faculty at IIIT Hyderabad. PK is a TEDx speaker. PK received his Ph.D. from the School of Computer Science at Carnegie Mellon University (CMU). His Ph.D. thesis work on anti-phishing research at CMU contributed in creating an award-winning startup, Wombat Security Technologies. Wombat was acquired in March 2018 for USD $225 million. In addition to his contributions to academia, PK is on advisory role on various government organizations and a Fortune 500 company. He is also part of various Board of Studies of different academic institutes across the country. He has co-authored research papers in the field of Privacy and Security in Online Social Media, Cyber Security, Computational Social Science, Social Computing, Data Science for Social Good, amongst others. He is passionate about solving societal problems using technologies, especially contributing to the domain of social computing. PK and his students have played an integral role in developing a technology used many State and Central Government agencies in India. He has spent time making notable contributions at organizations like IBM India Research Labs, Adobe Research Labs – India, Universidade Federal de Minas Gerais (UFMG) – Brazil, and Max Planck Institute for Software Systems – Germany. PK has served as a Program Committee member at prestigious conferences like WWW, CHI, PETs, ICWSM, CSCW, AsiaCCS. He was the Founding Head of Cybersecurity Education and Research Centre (CERC) at IIIT-Delhi. PK started and successfully manages PreCog, a research group at IIIT-Delhi.

Title of Talk 1: Privacy and Security in Online Social Media (PSOSM)
Synopsis: With increase in usage of the Internet, there has been an exponential increase in the use of online social media on the Internet. Websites like Facebook, Google+, YouTube, Orkut, Twitter and Flickr have changed the way Internet is being used. There is a dire need to investigate, study and characterize privacy and security on online social media from various perspectives (computational, cultural, psychological). Real world scalable systems need to be built to detect and defend security and privacy issues on online social media. I will describe briefly some cool ongoing projects that we have: Twit-Digest, MultiOSN, Finding Nemo, OCEAN, Privacy in India, and Call Me MayBe. Many of our research work is made available for public use through tools or online services. Our work derives techniques from Data Mining, Text Mining, Statistics, Network Science, Public Policy, Complex networks, Human Computer Interaction, and Psychology. In particular, in this talk, I will focus on the following: (1) Twit-Digest is a tool to extract intelligence from Twitter which can be useful to security analysts. Twit-Digest is backed by award-winning research publications in international and national venues. (2) MultiOSN is a platform to analyze multiple OSM services to gain intelligence on a given topic/event of interest (3) OCEAN: Open source Collation of eGovernment data and Networks. Here, we show how publicly available information on Government services can be used to profile citizens in India. This work obtained the Best Poster Award at Security and Privacy Symposium at IIT Kanpur, 2013 and it has gained a lot of traction in Indian media. (4) In Finding Nemo, given an identity in one online social media, we are interested in finding the digital foot print of the user in other social media services, this is also called digital identity stitching problem. This work is also backed by award-winning research publication. I will be more than happy to clarify, discuss, any of our work in detail, as required, after the talk.

Title of Talk 2: Social Computing: Sel(Kill)fies, Distracted Driving, #LokSabhaElections2019, and Mental Well-Being
Synopsis: Selfies have become a prominent medium for self-portrayal on social media. Unfortunately, certain social media users go to extreme lengths to click selfies, which puts their lives at risk. 250+ individuals have died since March 2014 until end of 2019 while trying to click selfies. We have been curating selfie deaths, building technologies to nudge users while taking dangerous selfies, e.g. Location Marker Saftie and Saftie Camera. We have made all the data and code that we have built public. More recently we have started analysing distracted driving using Snapchat; we curated data from 173 cities across the world to derive spatial and temporal patterns on a city-level and understand how distracted driving posting behaviour changes due to varied demographics. Details of the project including Data, Code, Paper can be found here. We are also in the process of characterising the problem of deaths using TikTok.

Social Media, today, is playing a very important role in the politics of almost every nation. In India, there has been a boom in social media political campaigns, which was more marked in the 2014 General Elections. We collected and analysed data from Lok Sabha Elections 2019, will discuss some interesting patterns and observations including "suspected" followers, #MainBhiChowkidar campaign. All our blogs on this topic can be found at http://precog.iiitd.edu.in/blog/. We also live blogged on the different phases of Elections e.g. Phase 5.

Social media can also be used as a source to study mental health and early understanding of psychological patterns of users. We have developed Mental Well-Being Index analysing 100 universities. Will discuss our current efforts in this space.

Title of Talk 3: Social Computing and Medicine
Abstract: With increase in importance of computing in healthcare, there has been an exponential increase in use of computing methodologies to develop better understanding of health care systems.

In the history of human lives, Health and Medicine have never seen the importance as it has in the current scenario. Perhaps for the first time in the history of democratic India, healthcare is predicted to play an important role in future election manifestos as well. I will briefly describe some cool projects that we are currently working on: WASHKaro to provide right information at the right time during pandemic situations like #COVID19; use social media as a source to study mental health and early understanding of psychological patterns of users; build transparent Agent Based Models, classical compartmental models to allow interactions with the assumptions like lockdown, testing, and social interventions. covision is a system that we build to showcase these models. The talk will end with showcasing some grand challenges that I see in this space which can be a great starting point for students interested in pursuing research and solving some real world problems. Many of our research work is made available for public use through tools or online services at precog.iiitd.edu.in including datasets that we use for research. Our work derives techniques from Social Computing, Computational Social Science, Machine Learning, Statistics, and Network Science. I will be more than happy to clarify, discuss, any of our work in detail, as required, after the talk. 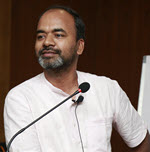 Title: Professor of Computer Science and Dean of Student Affairs at IIIT-Delhi